Beliefs and Practices of Nurse Practitioners Related to the Use and Recommendations of Probiotics for the Prevention of Antibiotic-Associated Vulvovaginal Candidiasis in Adult-aged Women: An Opportunity for Evidence-based Practice Change 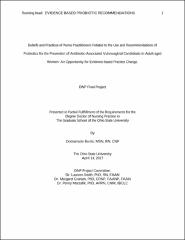 The purpose of this quality improvement project was twofold: (a) conduct semi-structured interviews to explore the beliefs and current practices of Nurse Practitioners (NPs) that prescribe antibiotic therapy in the outpatient setting, regarding probiotic products, and (b) compare these beliefs and practices to the best current evidence. A synthesis of the literature was conducted to describe and critically analyze current best practices of probiotic use in the clinical setting. The results from the semi-structured interviews may augment practice recommendations in clinic settings and effectiveness of probiotics as adjunctive treatment. An executive summary for dissemination to key stakeholders was produced. The project design included qualitative semi-structured interviews of nine NPs identified using a snowball recruitment method. Responses were recorded on an interview form and common themes to each question were analyzed. Responses were also compared to current evidence-based literature from sixteen peer-reviewed articles that examined the effectiveness of probiotics in the prevention or treatment of certain antibiotic associated side effects. Although the practitioners’ beliefs of symptoms to address with probiotics were generally consistent with current best evidence, gaps in knowledge were identified. The recommendation of probiotic strains and the number of cultures contained in the supplement were discussed in some interviews but was not always in agreement with the literature. Similarly, suggestions regarding the frequency and timing of dosing between the probiotic and the antibiotic recommended by the practitioners were often inconsistent with the research findings. The main recommendation for the use of probiotics is to suggest probiotics when antibiotics are prescribed to prevent or treat antibiotic-associated diarrhea. For this use, yogurts containing added live cultures or enteric-coated capsules are most effective. Products should contain 1-10 billion units of probiotic bacteria, be taken three to four times daily, and be continued for two weeks after the antibiotic is complete. Doses of probiotics and antibiotics should be separated by two to four hours to prevent destruction of the probiotic in the GI tract. Probiotics should be avoided in patients with high fevers or immunodeficiency. Current evidence suggests that probiotics are not effective to prevent or treat vulvovaginal candidiasis.