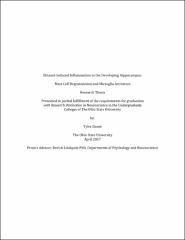 Fetal alcohol spectrum disorders (FASD) refer to a range of physical and mental deficits resulting from maternal alcohol consumption during pregnancy. Ethanol exposure leads to a neuroinflammatory response mediated through the activation of microglia, the brain’s resident immune cell. While microglia have been the focus of numerous neuroinflammation research studies, much less is known regarding ethanol’s effects on another resident brain cell, mast cells (MCs). MCs are found throughout the brain, including the hippocampus, and exist in two phenotypical states: a stable granulated state and an active degranulated state. MCs, not microglia, are considered to be “first responders” to a toxic event, including, possibly, ethanol exposure. Activation of MCs leads to rapid degranulation and the release of a number of preformed or newly synthesized pro-inflammatory cytokines, including TNFα and IL-6. Activated brain MCs are proposed to drive microglial activation and the exacerbation of neuroinflammation. In this study, rat pups were intragastrically intubated with ethanol (5g/kg/day) or sham intubated over postnatal days (PD) 4-6. Thirty minutes prior to each day’s intubation procedure pups were cryoanesthtized and bilaterally injected into the lateral ventricles with cromolyn, a MC degranulation inhibitor. All subjects were sacrificed on PD 6, two hours after ethanol administration, and the brains submitted to immunohistochemical processing for MCs and microglia. Results indicate that postnatal ethanol exposure induced significant MC degranulation and microglia activation in both the dorsal and ventral hippocampus, relative to sham-intubated and unhandled controls. Cromolyn injections attenuated MC degranulation and the morphological activation of microglia. The interaction between these two neuroimmune cells could lead to novel therapeutic treatments for those diagnosed with FASD.