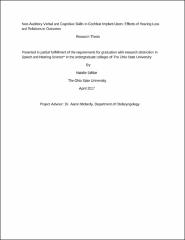 Cochlear implants (CIs) are a technology thirty years young. Their transformation throughout this time has made them more precise, common, and effective. However, there are still many unanswered questions surrounding these devices, particularly the broad variability of speech recognition outcomes in cochlear implant users, which continues to frustrate patients, clinicians, and researchers alike. While some users have speech recognition abilities comparable to normal hearing individuals, other users can recognize less than 10% of words in quiet. To investigate the variability of CI outcomes, we studied speech recognition and the cognitive abilities of those who use an implant in comparison to their age-matched normal hearing (NH) counterparts, using a test battery of both verbal and non-verbal tests of cognition in a non-auditory fashion. Speech recognition was assessed for words and sentences (in quiet for CI users, noise-vocoded versions for NH controls). The cognitive test battery consisted of tasks of rapid word and nonword reading, vocabulary, working memory, perceptual organization, and nonverbal IQ. Preliminary findings suggest that better performance on tasks of word and sentence recognition are associated with better rapid word and nonword reading, better perceptual organization of visually degraded sentences, and nonverbal IQ in both groups, along with working memory in the NH controls. Interestingly, CI users demonstrated better group mean performance than NH peers on a task of working memory of visual symbols, but poorer performance on nonverbal IQ. Findings from this study will assist us in developing a more comprehensive understanding of how cognitive factors influence outcomes for individuals with CIs.