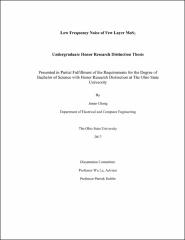 The study of 2D semiconductor materials has been proposed as one of the most promising candidates to resolve the problem of upcoming limit of CMOS fabrication technology in downscaling. We can further shrink the device channel length and gate thickness to atomic scales considering the thin layer properties of 2D semiconductors. The semiconducting material molybdenum disulfide (MoS2) has attracted more attention for its possible application of into field-effect transistors (FETs) with its proper energy bandgap. This study therefore investigates the low frequency noise characteristics of the two-terminal few layer 6nm thick MoS2 device grown by Chemical Vapor Deposition (CVD). We focus on the transport mechanisms of the few layer MoS2 channel rather than the influence of metal contacts. Studies of the device noise transport characteristics at temperatures ranging from 10K to 296K were conducted regarding different carrier transport mechanisms so as to reveal the relation between these two important device concepts of interest. As it has been revealed before, the carrier transport study suggests that the device is dominated by thermally activated band transport at T>180K, Efros-Schklovskii hopping when 50K<T<180K, and resonant tunneling when T<50K. The low frequency noise result of such device is dominated by mobility fluctuation mechanisms when T>180K, corresponding to the band transport mechanism. Such result could be attributed to the material crystal quality as the mobility increases with increasing temperature, suggesting the dominance of impurity scattering mechanism under all ranges of temperatures measured. Also, the variable range hopping noise signatures are also observed when 75K<T<180K, which indicated the consistence of low frequency noise study and carrier transport phenomena. When T<50K, ubiquitous phenomenon of non-Lorentzian power spectrum density was observed potentially related to resonant tunneling mechanisms. The study of low frequency noise would be meaningful for further applications of such low dimensional semiconductor materials system considering the high surface to volume ratio. The clarification of various carrier and noise transport mechanisms would be therefore informative for further investigation and development of such materials.