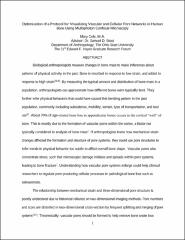 Biological anthropologists measure changes in bone mass to make inferences about patterns of physical activity in the past. Bone is resorbed in response to low strain, and added in response to high strain. By measuring the typical amount and distribution of bone mass in a population, anthropologists can approximate how different bones were typically bent. They further infer physical behaviors that could have caused this bending pattern in the past population, commonly including subsistence, mobility, terrain, type of transportation, and tool use. About 70% of age-related bone loss in appendicular bones occurs in the cortical “wall” of bone. This is mostly due to the formation of vascular pores within the cortex, a factor not typically considered in analysis of bone mass. If anthropologists knew how mechanical strain changes affected the formation and structure of pore systems, they could use pore structures to infer trends in physical behavior too subtle to affect overall bone shape. Vascular pores also concentrate stress, such that microscopic damage initiates and spreads within pore systems, leading to bone fracture. Understanding how vascular pore systems enlarge could help clinical researchers to regulate pore-producing cellular processes in pathological bone loss such as osteoporosis. The relationship between mechanical strain and three-dimensional pore structure is poorly understood due to historical reliance on two-dimensional imaging methods. Pore numbers and sizes are distorted in two-dimensional cross-section by frequent splitting and merging of pore systems. Theoretically, vascular pores should be formed to help remove bone under low strains. Yet two-dimensional methods have produced many contradictory inferences about the relationship of pore number and orientation to mechanical demand. A separate cellular (lacunar-canalicular) pore network houses osteocyte cells, which trigger bone formation or resorption in response to mechanical strain changes or microdamage. Cellular pores should theoretically predominate in regions under high strain, where the cells are needed to detect damage. Yet two-dimensional methods can only count the number of these tiny lacunae and have not produced consistent associations with mechanical demand. We sought to optimize a three-dimensional imaging protocol for visualizing vascular and cellular pore networks in human bone. Confocal laser scanning microscopy (CLSM) is an emerging method for three-dimensional imaging of bone tissue, with higher resolution than more traditional micro-CT. Multiphoton CLSM uses two photons of infrared light to excite a fluorescent stain in a bone structure at a precise >1 µm diameter location and depth. Successive depths are stacked into a three-dimensional image. Current methods of staining human bone porosity for CLSM imaging use decalcification that can introduce histological defects, or require perfusion of a stain during life, or stain non-pore features. Ciani et al. (2009) developed a staining protocol for rats and mice, using fluorescein isothiocyanate isomer I (FITC) at 1% in 100% ethanol to exclusively stain vascular and cellular pores. However, rats and mice lack the large vascular pore systems seen in humans. We tested this protocol for visualizing vascular and cellular pore networks in human bone. Ten cross-sections approximately 500 to 600 µm in thickness were cut from the midshaft of a fresh cadaveric human rib. Each cross-section was placed in a 15 mL volume of freshly prepared 4% formaldehyde and fixed for 24 hours at room temperature under gentle rotation. Cross-sections were dehydrated in ascending grade ethanol (75%, 95%, and 100% for 5 minutes each). FITC was diluted in 100% ethanol at concentrations of 1%, 0.9%, 0.8%, 0.7%, 0.6%, 0.5%, 0.4%, 0.2%, and 0.1%. Each 10 mL solution was gently rotated for one hour and then filtered. Each cross-section was placed in a different concentration of solution for four hours under gentle rotation. Each cross-section was then rinsed in 15 mL of 100% ethanol under gentle rotation for 30 minutes, and then air dried. Small regions (508.93 µm x 508.93 µm) were imaged using an Olympus FV1000 MPE Multiphoton Laser Scanning Confocal microscope with N.A. 1.05, 25x water immersion objective, 800 nm laser excitation wavelength, resolution 1024 x 1024 pixels, step size 0.63 µm, and 2x Kalman averaging. Stain concentrations above 0.5% FITC could clearly resolve vascular and cellular pore structures approximately 100 µm deep into the sample (1% = 150.81 µm, 0.9% = 104.26 µm, 0.8% = 122.32 µm, 0.7% = 129.97 µm, 0.6% = 142.65 µm). As stain concentration fell below 0.5%, depth of penetration dropped off sharply (0.5% = 76.86 µm, 0.4% = 66.15 µm, 0.3% = 76.23 µm, 0.2% = 59.04 µm, 0.1% = 59.85 µm). As concentration decreased from 1% FITC, pore structures also became more variable in brightness at a given depth in the sample. The high voltage and offset values required to visualize the smaller cellular pores sacrificed resolution at the boundaries of the vascular pores, which were much brighter due to greater stain absorption.