Corrosion Behaviors of Aluminum Following a Loss of Coolant Accident 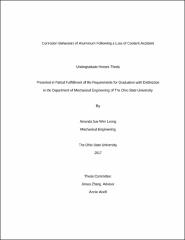 Aluminum (Al) corrosion in the containment of nuclear reactor has detrimental effects on the performance of emergency-core–cooling system (ECCS). In a loss-of-coolant accident (LOCA), the ECCS is initiated to shut down the operation of a nuclear power plant safely. The cooling alkaline solution flowing through the ECCS has a high concentration of boric acid, which has been suggested to be corrosive to Al alloy. Precipitations caused by Al corrosion potentially obstructs the sump screens while the solution is re-circulated in the nuclear core through ECCS. This study aims to understand the release and corrosion behaviors of Al alloy exposed to the boron-containing alkaline solution. The corrosion rate of Al was determined through obtaining the mass of Al released into the solution as well as the formation of scale on the Al sample. The test conditions were referenced for the prior literature reviews as well as the actual design of PWR. To explore further into the effect of Al corrosion towards the ECCS, the effects of temperature, pH and submersion time of Al which exposed to the borate buffer solution have been studied. Experiments were undertaken in a shaker table equipment which simulates the conditions of Al exposure to the containment sump following a LOCA. Results have shown that at a higher temperature, the corrosion rate of Al was significantly higher. Across a period of submersion time of Al in solution, the corrosion rate of Al decreased drastically. Al corrosion rate is higher at higher pH and temperature. At 85C, the dissolved Al re-deposit on the sample surface which makes less Al dissolved in solution.