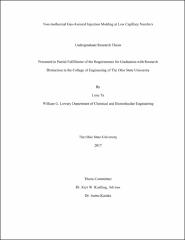 In gas-assisted injection molding (GAIM), pressurized gas is injected into a cavity filled with molten polymer to create a mold with a hollowed core. Experimentation in non- isothermal conditions at lower capillary numbers was necessary to evaluate the accuracy of a recently developed simulation model. Fractional coverage is dependent on a multitude of parameters including the mold’s temperature gradient, delay time, and capillary number used. Capillary number is the ratio of viscous forces to interfacial tension and is a strong function of gas bubble velocity and fluid viscosity. Previous experiments have been performed at capillary numbers high enough to maintain the assumption that fractional coverage will plateau at a value of 0.6. This same assumption, however, cannot be used for low capillary bubble speeds. The experiments were conducted at low capillary numbers for two Newtonian fluids, and two water baths with varying temperatures were used to create a gradient. A high-speed camera captured the polymer behavior as the temperature gradient and gas injection delay time varied for each trial, and was used to determine the fractional coverage. The simulation program calculates fractional coverage with input conditions similar to the trials, and will be compared to the experimental fractional coverage. It implements a numerical solution through a hybrid control-volume finite element/finite-difference method, a momentum balance, and heat-transfer governing equations to predict wall thickness. The simulation incorporates a correcting equation at low capillary numbers to adjust for non-uniform thickness down the tube, but must be checked for any deviations from the actual. Experimental results were crucial to determine if the simulation program can accurately make predications of more realistic process parameters. This research can become a foundation for future characterization of even more complex GAIM processes, such as ones of non-Newtonian fluids in non-isothermal, non-steady state systems.