Particulate Adhesion and Removal From Substrates 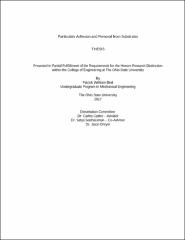 One of the major issues plaguing the semiconductor industry is the adhesion of submicron-sized particles (called particulates) to silicon wafers (substrates) during wafer manufacturing. Such substrate contamination results in unreliable performance of the wafers when used as the foundation for integrated circuits, causing electronic device failure. Currently, brush cleaning, Atomic Force Microscope (AFM) manipulation, and laser induced shock waves are utilized to cleanse contaminated substrates. While these are genuine contributions to particulate removal efforts, the prohibitive cost and lack of efficiency in mass-scaling these techniques pose major issues. This project aims to develop an efficient technique to remove particulates from substrates. The proposed removal method involved the central premise: vibratory excitation of a substrate may lead to relative motion between the adhering particulate and substrate, thereby breaking the adhesion bonds between the two, leading to particulate removal. To test this claim, a physics-based model was created and microscale and macroscale experiments were carried out to validate the model. During both the microscale and macroscale experimentations, relative motion between a particulate and substrate was observed for a range of frequencies. Although the motion of the particulate was not able to be quantified with respect to time on the microscale, the theoretical model was able to predict the measured aperiodic behavior of the particulate in the macroscale experiments. Oscillating a substrate was ultimately determined to be a plausible methodology to effectively remove particulates from substrates. It is further expected that future parametric analysis of the microscale model and experiments will aid in the development of a more polished removal method. In doing so, the project’s central aim, to establish a prototype to successfully clean contaminated wafers, may be realized, leading to the potential saving of extraneous amounts of physical and financial waste within the semiconductor industry.