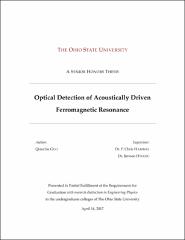 The nitrogen-vacancy (NV) center is a diamond defect that has been considered a potential material to develop nanoscale magnetometers. In this study, we use NV-centers in diamond to optically detect ferromagnetic resonance (FMR) driven by surface acoustic waves. An experimental setup was designed to simultaneously measure the fluorescence of NV-diamonds and electrical transmission signal when the ferromagnetic sample reaches FMR. We investigated the correlation between NV-center fluorescence and input microwave frequency, external magnetic field, and position relative to the ferromagnetic material. Moreover, we developed a scanning magnetometer by attaching NV-diamonds to the tip of an AFM probe. An optically detected magnetic resonance (ODMR) spectrum is obtained from the NV-diamond probe. The NV-diamond probe will be used in future studies to understand the spatial dependence of the coupling between NV-centers and ferromagnetic materials.