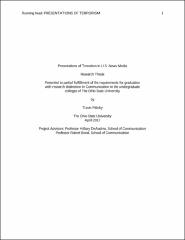 The framing and presentation of news stories has been shown to influence audience attitudes and perceptions. With this in mind, this experiment analyzed whether the different terms used to describe the terrorist group ISIS may influence audience attitudes about the religion of Islam. It was thought that terrorism labels could impact Americans’ attitudes toward religious groups, presidential approval, and national security policies. In this experiment, students (N = 440) were exposed to one of three news releases. Two news releases were written to recognize the anniversary of a fictional terrorist attack, whereas the third served as a control and discussed an environmental issue. The terrorism news releases were identical except for the name of the alleged perpetrators as ISIS or Daesh. Following the news release, students reported their attitudes toward the religion of Islam. Given that the term ISIS directly references the religion of Islam, unlike Daesh, use of this term was hypothesized to more negatively influence audiences’ attitudes toward Islam. These differences were also studied through Terror Management Theory (TMT), which posits that peoples’ attitudes are affected by thoughts of their own death. Depictions of violence in news about terrorism make TMT a useful theory for this experiment. It was hypothesized that participants made to think about their own death would report more negative opinions toward Islam than participants that were not. The results suggested that people’s attitudes toward Islam were not significantly different between framing conditions. However, the results suggested that thoughts of death had a greater effect on attitudes toward Islam than the framing manipulation. Additionally, there was suggestive evidence that thoughts of death affected participants’ attitudes about national security policy and presidential approval. The outcomes of this experiment have implications for politicians and the news media who seek to avoid contributing to Islamophobia in their presentations of terrorism. The results contribute to existing research on media effects and terror management theory