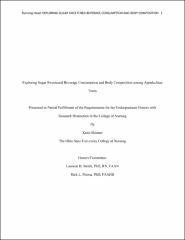 A factor gaining increased attention in research and clinical practice regarding adolescent obesity prevalence is sugar sweetened beverage (SSB) consumption and its role in health outcomes. Adolescents residing in rural Appalachia have the highest consumption rate of SSBs when compared to other adolescent populations. The purpose of this study was to explore SSB consumption patterns among adolescents residing in rural Appalachia. Obesity-related health outcomes – body mass index (BMI) and body fat percentage – and their relationship to SSBs were also examined. This cross-sectional study was a secondary data analysis of a sub-sample of high school aged participants enrolled in a larger randomized controlled trial. For this study, Wave 1 and Wave 2 baseline data from subjects at 11 schools was analyzed (n= 361). Descriptive and inferential statistics were conducted. Bivariate Pearson correlations, Spearman correlations and independent t-tests were conducted with a p = .05. Over one-third of subjects were classified as either overweight (22.5%) or obese (20.8%). Nearly five percent were classified as morbidly obese with a BMI over 40. Girls had a higher body fat percentage (32.8%) when compared to boys (21.3%), indicating a gender difference (t = 12.1, df = 331, p = .000). More than half of the subjects reported consuming SSBs at least four days per week, with 30% consuming SSBs seven days per week. The mean SSB servings per day was 2.8 (SD = 2.76). BMI was related to the number of SSB servings per day (r = .11, p = .05), while body fat percentage was related to the number of days per week that SSBs were consumed (r = .10, p = .05). Although this study was exploratory in nature, promoting a reduction of SSB consumption may improve obesity related health outcomes in a population that still suffers from pervasive obesity.