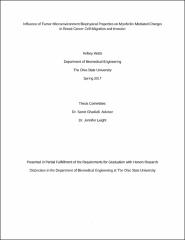 The five-year survival rate for breast cancer decreases from 98.6% to 25.9% if the cancer metastasizes to invade other body tissues. Metastasis occurs when cancerous cells migrate away from the original tumor to other parts of the body. This migration requires increased cell motility and previous studies indicate that loss of a membrane repair protein, Myoferlin (MYOF), can be used to reduce the motility of a highly invasive line of breast cancer cells, MDA-MB-231. In addition, biophysical properties of the tumor microenvironment, such as tissue stiffness and fibroblast-mediated remodeling of the collagen extracellular matrix, can alter cell motility. For example, the loss of an important tumor suppressor, PTEN, in stromal fibroblasts leads to increased collagen deposition and remodeling, a stiffer microenvironment, and increased tumor growth. However, it is not known if “knocking down” MYOF expression (MYOF-KD) can modulate cell motility under different biophysical conditions. In this study, we first cultured spheroids of lentiviral control (LVC) and MYOF-KD tumor epithelial cells on polyacrylamide gels of varying stiffness and quantified migration over 24 hours. LVC cells cultured on stiffer gels exhibited greater migration while the migration of MYOF-KD cells was relatively low on all gels. In a second study, wild-type mouse mammary fibroblasts (WT-F) or fibroblasts with a mutation that results in the loss of PTEN (PTEN-/-) were seeded into a 2 mg/mL collagen gel and allowed to remodel the collagen matrix over 24 hours. Fluorescently labeled LVC and MYOF-KD epithelial cells were then seeded on top of the remodeled gels and invasion through the gel was quantified. PTEN-/- fibroblasts induced significantly more invasion for both LVC and MYOF-KD cells, and MYOF-KD cells invaded less than LVC cells under all conditions. In order to determine if this change in invasion was caused by a soluble factor, a conditioned media invasion assay was conducted with LVC and MYOF-KD cells cultured in media that had been conditioned by WT-F or PTEN-/- fibroblasts. PTEN-/- conditioned media drove significantly more invasion than the media control in both the LVC and MYOF-KD cells, but the difference in invasion between the LVC and MYOF-KD cells was not significant. Additionally, the WT-F conditioned media resulted in a significant increase in invasion from the media control but only for the LVC cells. This indicates the possible presence of soluble factors secreted by PTEN-/- fibroblasts that affect both LVC and MYOF-KD cells. These results support that knocking down MYOF leads to decreased migration and invasion under different biophysical conditions. Future studies will seek to determine the specific mechanism by which knocking down MYOF alters cancer cell motility.