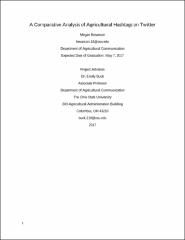 Hashtags are used on various social media platforms, particularly Twitter, in order to make messages searchable. Through the use of hashtags, individuals and organizations in agriculture tell the story of agriculture by sharing information to educate the public. However, these hashtags can be “hijacked” by non-agricultural sources to share unintended, and often negative messages about food safety, food production, and animal welfare. Hijacked hashtags can ruin the credibility of farmers and agricultural organizations trying to utilize them to educate the public. The researcher sought to understand whether the hashtags #farm365 and #harvest16 were being used by the intended audience to promote agriculture. The researcher analyzed the two hashtags using Sysomos MAP software during a one-month period. Analysis of these hashtags showed that agricultural producers primarily used #harvest16 to showcase agriculture in a positive way, while individuals not directly involved in the agricultural industry used #farm365 to demote agriculture. The results of this study show that there are several demographic differences between the two groups using these hashtags. Agricultural producers should address the concerns raised by those using #farm365 in order to inform consumers and return the hashtag to its intended purpose of showing agriculture in a positive light.