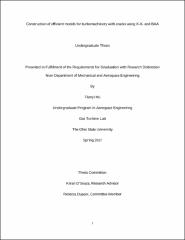 Analysis of the influence of cracks on turbomachinery is important for design, failure prognosis and structural health monitoring. However, predicting the dynamics of turbomachinery with cracks is relatively challenging because the size of industrial turbomachinery models is typically quite large since they need to capture the complex geometry. The large model size combined with the nonlinearity due to the cracks in the turbomachinery requires a considerable computational effort. To deal with this difficulty, an efficient method to build reduced order models (ROMs) for turbomachinery with cracks is developed. This technique employs the relative coordinates to describe the motion of the crack surface and is referred to as X-Xr approach. The relative coordinates are defined as the relative displacements between contact pairs along the crack surface. The matrices of the governing equations are divided into the relative and pristine components. Due to the specialized form of the X-Xr approach, the ROM of the turbomachinery with a crack is constructed from models of the cracked and pristine sector models alone, without the need for constructing the full stage model of the system, and thus greatly lowering the computational expense. The bilinear amplitude approximation (BAA) is combined with the ROM to quickly estimate the forced response of the piecewise-linear nonlinear system using linear analysis. The X-Xr method has been used on a turbomachinery model with a crack to lower the size of the model from approximately 80,000 degrees of freedom to approximately 200 degrees of freedom. In addition to the ROM matching the modal properties of the full-order system, the forced response analysis from using the ROM with BAA has also been shown to match the full-order nonlinear result. The work presents a way to create a ROM that can be used to analyze turbomachinery with cracks at a fraction of the time that is needed for the full-order analysis.