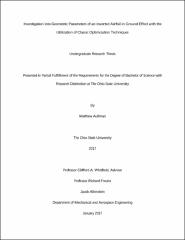 In competitive automotive racing, wing aerodynamics have been utilized since the 1960s to reduce lap time. Studies show that the near ground proximity of the race car’s front wing aerodynamically enhances the wing’s performance. Despite these studies, little is publicly released on the design of wings for the ground proximities experienced in automotive racing. For this study, the modified NACA 4 Series airfoil family was selected to investigate the impact that airfoil geometry has on the aerodynamic characteristics of an inverted wing in ground effect. Due to the large number of airfoil geometries required to test, ANSYS Fluent, a CFD software, was utilized to predict aerodynamic effects. Trend lines were developed for fundamental geometric shape changes of an inverted NACA 6612-63 at five degrees angle of attack and a height of fifteen percent chord from the lowest point of the airfoil. These trends were then utilized in determining which geometric parameters would be selected to study the effects of coupling using graphical optimization techniques. The trends would be further implemented in defining performance constraints in the optimization process.