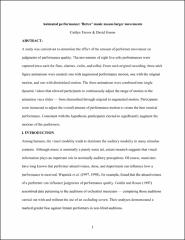 A study was carried out to determine the effect of the amount of performer movement on judgments of performance quality. The movements of eight live solo performances were captured (two each for flute, clarinet, violin, and cello). From each original recording, three stick figure animations were created: one with augmented performance motion, one with the original motion, and one with diminished motion. The three animations were combined into single dynamic videos that allowed participants to continuously adjust the range of motion in the animation via a slider — from diminished through original to augmented motion. Participants were instructed to adjust the overall amount of performance motion to create the best musical performance. Consistent with the hypothesis, participants elected to significantly augment the motions of the performers.