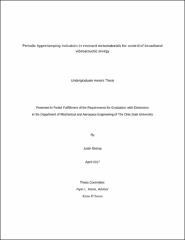 The absorption of structural vibrations and noise is often essential to structural integrity and operator safety. These unwanted vibroacoustic energies are typically broadband, which presents a challenge to traditional resonance-based dampers. Additionally, low frequency vibrations and noise are particularly difficult to absorb in situations where lightweight solutions are required. Recent studies have shown that utilizing the elastic stability limit, or buckling point, can lead to a theoretically unbounded increase in damping ratio. Additionally, by embedding distributed masses within acoustic foams, damping is increased far beyond the capabilities of foam alone. By taking advantage of both this near-buckling phenomenon and distributed masses, this research investigates periodically arranged hyperdamping inclusions within foam for lightweight, broadband vibroacoustic damping capabilities. Behavior of hyperdamping metamaterial arrays is numerically and experimentally characterized. Acoustic models suggest that hyperdamping inclusions are more effective at noise absorption when spread apart, which is reflected in an acoustic and a vibration experimental study. An investigation of various arrangements of inclusions shows that having multiple inclusions perpendicular to the wave propagation axis is more effective than having multiple inclusions along the direction of wave propagation, which suggests that a plane of distributed inclusions most effectively increases vibroacoustic energy absorption. Hyperdamping inclusion arrays are demonstrated to be robust, in that hyperdamping architectures which are intentionally “mistuned” away from the elastic stability limit are still highly effective for broadband attenuation of waves. Hyperdamping inclusions are compared to traditional solid elastomer inclusions, and are shown to have comparable or increased energy absorption while weighing less. These findings demonstrate a new idea for a lightweight, broadband damping material system. The broad applications of this system include numerous vehicle systems, where weight is key to performance and high levels of energy dissipation are required.