Investigating the interaction of ascorbic acid with anthocyanins and pyranoanthocyanins 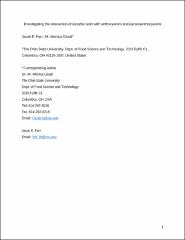 Juices colored by anthocyanins are subject to color loss related to fortification with ascorbic acid (AA), likely through condensation at carbon-4 (C4) of anthocyanins (ACN). To investigate this mechanism, pyranoanthocyanins (PACN), having a fourth-ring covalently occupying C4, were synthesized to compare against ACN (chokeberry extract and cyanidin-3- galactoside). Pyranoanthocyanins were synthesized by combining chokeberry anthocyanins with pyruvic acid. AA was added to either chokeberry ACN, cyanidin-3-galactoside or 5- carboxypyranocyanidin-3-galactoside. Samples were stored in the dark for five days at 25oC. Spectral (380-700 nm), color (CIE-L*c*h*) and HPLC data were collected. Extensive bleaching was observed for ACN+AA, with half-life (t1/2) reduced from 35.7 to 0.3 days. An 8-13 fold increase in t1/2 was observed for PACN-AA compared to ACN-AA. A 10 nm hypsochromic shift was observed for PACN-AA, and three new chromophores were formed. The PACN having enhanced resistance to bleaching suggested AA accessibility to C4 played a critical role in ACN bleaching.