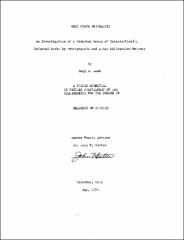 A suite of rocks from the Kings Canyon Shear Zone, located in the Northgate fluorspar district in Jackson county, Colorado, was made available for study by Dr. John F. Sutter, Ohio State University. The investigation of these rocks was limited to the mineralogical and textural changes observed by the use of the petrographic microscope and by x-ray diffraction. Previous studies by Dr. Sutter have been mainly concerned with K/Ar age dating and the geochemistry of these cataclastically deformed rocks. His findings show a decrease in apparent age of tt1e rock from both sides of the shear zone toward the center, and he attributes this to increasing neomineralization toward the center of the shear zone. The samples of cataclastic rock in the suite are, for the most part, derived from a common parent rock type, a hornblende gneiss. The rocks sampled occur at various locations within the shear zone, and they exhibit very well the changing degrees of cataclastic degradation such as granulation, recrystallization, and neomineralization. Intergranular and intragranular strain features are apparent in all the samples. Three samples, which occur in the central portion of the shear zone, have a very different texture, mineralogy, and chemistry than the other samples of cataclastic rock in the shear zone. The apparent K/Ar ages of these anomalous samples also, according to Dr. Sutter, do not conform with the ages of adjacent cataclastic rocks which were derived from the hornblende gneiss. Some extra emphasis was made in this study to determine the origin of these rocks on the bases of mineralogy and texture. In general, all samples show increasing recrystallizatiJn and neomineralization as they approach the center of the shear zone.