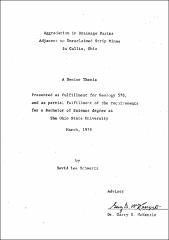 In the last twenty five years, large amounts of a sandy material were deposited on floodplains adjacent to strip mined lands due to the abrupt exposure of numerous spoil banks. The hydrometer technique is used to show a distinct difference of grain sizes between the old alluvial soil, and the aggrading material from eroding spoil banks in Gallia County, Ohio. The upper layer, or recent alluvium is classified texturally as a sandy loam, loamy sand and a sand. The lower layer is a loam, or silt loam. Aggradation rates in drainage basins in Gallia County were calculated by using areas, sediment volumes, and the universal soil loss equation. The lithology of particle sizes greater than 2 mm 1 in the upper aggrading layer is extremely similar to the disturbed bedrock in Gallia County. By the use of the soil-loss equation, it was estimated that J85to 444· tons/acre/year is being eroded from spoil slopes in a test drainage basin in the Addison quadrangle. Results indicate that83,436 to 96,326 tons of soil per year are being eroded from the test drainage basin. Without reclamation, continued erosion would allow an additional accumulation of 2.2 feet per 25years.i