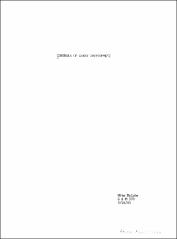 Many variables other than the carbonate and hydrocarbonate dissolution of limestone contribute to the development of karst landscapes. Atmospheric CO, previously thought to be the most important factor in karst evolution, has recently been relegated to a much less significant role. Biologic processes (bacterial decay…) and organic acids (humic…) have been shown to be as effective as any agents in promoting karstification. Small amounts of MgCO in a limestone greatly inhibit dissolution, yet other contaminants such as iron oxide, clay minerals, and silica seem to have little effect. The disproportionately high occurrence of karst in Mesozoic rocks maybe due to a combination of their high strength from compaction with time and high degree of "secondary permeability" caused by tectonic stresses. In general, a pure, massive, holocrystalline limestone with a high degree of jointing is considered favorable for the development of karst.