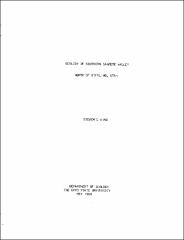 The stratigraphic section in the report are begins with the Arapien shale, Upper Jurassic in age and thickness unknown. The Arapien has two members: the lower is the Twelvemile Canyon, shale, red, and salt-bearing; and the upper is the Twist Gulch, siltstone and shale. The next unit is the Morrison formation which is conglomerate, sandstone, sitlstone, and red measuring 1000 feet. Above the Morrison formation is the Indianola group which is divided into four formations of which three are found in the report area. At the bace of the group is the Sanpete formation which is sandstone1400 feet thick. Next is the Allen Valley shale, gray, 900 feet thick. Then is the Funk Valley formation whic is sandstone and shale 2440 feet thick. At the top of the group but not exposed in the report area is the Sixmile Canyon formation which is sandstone. The lndianola group is Cretaceous in age. The Indianola and older units are below an angular unconformity, the unit above is the North Horn formation which is below a'second angular unconformity. The North Horn formation is sandstone, conglomerate, and shale200 feet thick, and is Cretaceous and Tertiary in age. Above the upper angular unconformity is the Flagstaff Iimestone, white, massive, cherty, and 650 feet thick. Above the Flagstaff Iimestone is the Colton formation, sandstone, red and 30 feet thick. Next is the Green River formation which is white Iimestone, green siltstone and mudstone, and 201 feet thick. Above the Green River formation is the Crazy Hal low formation, sandstone, white, and 240 feet thick. The structure in the area includes a large anticline of Indianola and older units which were eroded level. The anticline is overturned to the west and the axis trends north-south. A syncIine is imposed 1000 yards to the east of the anticIine axis and also trends the same way. The syncIine is composed of Flagstaff and younger formations. Major faults occur in the west part of the area and are part of the Gunnison fault whic runs north from the area. Geomorphology of the area includes a major debris flow which came from Forbush Cove in Funks Canyon Sec. I, T. 19 S, R. 2 E, and dammed the San Pitch river forming a take. Sediments were deposited and later the water cut a channel draining the lake. Another lake was formed which still exists, PaIisade Lake. Geologic history of the area is basically deposition of sediments in a near shore sea which was interrupted by fluvial deposits. These units were folded and the anticIine was eroded forming an angular unconformity. Later fluvial deposits and lake deposits covered the area. Later faulting and folding formed the major faults and syncIine.