Interview of A. V. Shirk by Kevlin Haire 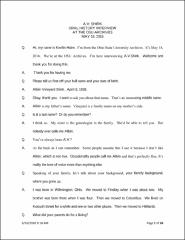 A.V. Shirk describes his roughly five-year career at WOSU-Radio in the early 1960s. Shirk talks about how he got the job, then discusses how he first worked as a clerk typist in the music department, timing music selections for later airing. He was later promoted to assistant music programming director under Fred Calland. In 1961, Shirk aired a series on the history of topical and political singing in the U.S. This included a short series on Songs of Dissent, which featured singing by an OSU student group called the Dissent Forum. Because of the political nature of the music, and the political climate at the time, the broadcast created great controversy, and Shirk was suspended without pay for 30 days. Shirk returned to the station and continued to work there until 1964 when his position was eliminated as part of a series of budget cutbacks. In the interview, Shirk also describes general aspects of working at WOSU during that period.