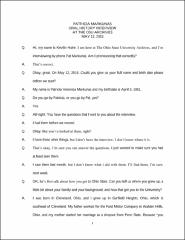 Pat Markunas recalls her time as a student at Ohio State University in the 1970s, both as an undergraduate and a graduate student. She describes choosing a major, living in an all-women’s dorm, participating as a fraternity’s little sister, and becoming involved in various student organizations, such as the Women’s Self-Government Association. She also describes the enormous changes on campus during that time for women, such as the ending of curfews and dress codes. Specifically, Markunas recalls her tenure as president of WSGA, and the activities in which it was involved, including the bridal fair, which was a controversial event at that time. She also describes the effect the federal Title IX law had on the organization, including its involvement in addressing the issue of single-sex honoraries on campus. In addition, she describes her involvement as a graduate student in the establishment of the women’s studies program at OSU. Finally, she describes her life after OSU.