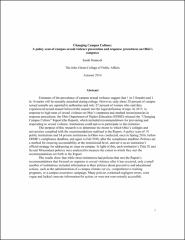 Estimates of the prevalence of campus sexual violence suggest that 1 in 5 females and 1 in 16 males will be sexually assaulted during college. However, only about 20 percent of campus sexual assaults are reported to authorities and only 27 percent of women who said they experienced sexual assault believed the assault met the legal definition of rape. In 2015, in response to high rates of sexual violence on Ohio’s campuses and marked inconsistencies in response procedures, the Ohio Department of Higher Education (ODHE) released the "Changing Campus Culture" Report (the Report), which included recommendations for preventing and responding to sexual violence. Institutions could opt-in to participate in this initiative. The purpose of this research is to determine the extent to which Ohio’s colleges and universities complied with the recommendations outlined in the Report. A policy scan of 14 public institutions and 14 private institutions in Ohio was conducted, once in Spring 2016, before ODHE's compliance deadline, and again in Fall 2016, after the compliance deadline. Policies are a method for ensuring accountability at the institutional level, and serve as an institution’s official strategy for addressing an issue on campus. In light of this, each institution’s Title IX and Sexual Misconduct policies were analyzed to measure the extent to which they met the recommendations set forth in the Report. The results show that while most institutions had policies that met the Report's recommendations that focused on response to sexual violence after it has occurred, only a small number of institutions included information in their policies about preventive and educational actions, such as the administration of a campus climate survey, comprehensive training programs, or a campus awareness campaign. Many policies contained negligent errors, were vague and lacked concrete information for action, or were not conveniently accessible.