Inhibition Performance Study of Vanadate on AA2024-T3 at High Temperature by SEM, FIB, Raman and XPS 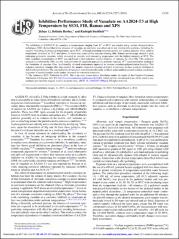 The inhibition of AA2024-T3 by vanadate at temperatures ranging from 10◦ to 80◦C was studied using various characterization techniques. SEM showed that in the presence of vanadate, no corrosion was observed on any intermetallic particles, including the reactive Al2CuMg (S phase) at temperatures up to 50◦C. Although trenching occurred around the S phase particles when solution temperature increased to 70◦C and above, S phase was protected by vanadate-bearing film. Raman spectroscopy showed a peak indicating polymeric vanadate, which increased in intensity with increasing temperature with the highest intensity at 80◦C. The high vanadium concentration at 80◦C was attributed to fast reduction reaction kinetics of vanadate by Al or Mg. This reduction reaction is confirmed by XPS, and the reduced forms of vanadium appeared to promote vanadate (V5+) polymerization leading to the formation of vanadate films. Additionally, elevated temperatures appeared to increase vanadate polymerization kinetics. This reductive adsorbed vanadate film also enabled the samples treated in vanadate at higher temperature to have residual inhibition in NaCl without inhibitors. The reduced forms of vanadium were found to be easily oxidized under ambient aerated solution conditions. Exposure of treated samples in air further increased the corrosion resistance.

Research was sponsored by the Army Research Laboratory and was accomplished under Cooperative Agreement Number W911NF- 14-2-0004. The views and conclusions contained in this document are those of the authors and should not be interpreted as representing the official policies, either expressed or implied, of the Army Research Laboratory or the U.S. Government. The U.S. Government is authorized to reproduce and distribute reprints for Government purposes notwithstanding any copyright notation herein. Purchase of the Raman microprobe was supported by the National Science Foundation under Grant No. 0639163.

© The Author(s) 2015. Published by ECS. This is an open access article distributed under the terms of the Creative Commons Attribution 4.0 License (CC BY, http://creativecommons.org/licenses/by/4.0/), which permits unrestricted reuse of the work in any medium, provided the original work is properly cited. [DOI: 10.1149/2.0371506jes] All rights reserved.