"Not of this World": The Emergence of the Old Colony Mennonites 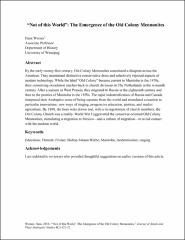 By the early twenty-first century, Old Colony Mennonites constituted a diaspora across the Americas. They maintained distinctive conservative dress and selectively rejected aspects of modern technology. While the label "Old Colony" became current in Manitoba in the 1870s, their conserving orientation reaches back to church divisions in The Netherlands in the sixteenth century. After a sojourn in West Prussia, they migrated to Russia in the eighteenth century and then to the prairies of Manitoba in the 1870s. The rapid industrialization of Russia and Canada sharpened their Anabaptist sense of being separate from the world and stimulated a reaction to particular innovations: new ways of singing, progressive education, pietism, and market agriculture. By 1890, the lines were drawn and, with a re-registration of church members, the Old Colony Church was a reality. World War I aggravated the conserver-oriented Old Colony Mennonites, stimulating a migration to Mexico—and a culture of migration—to avoid contact with the modern world.