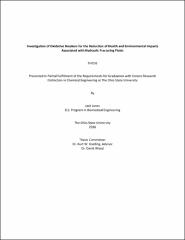 Hydraulic fracturing ("fracking") has long been necessary to obtain natural gas in the US and around the world. Tensions in the Middle East and dwindling oil reserves that cannot be obtained by conventional means have caused fracking to become even more popular. Unfortunately, major environmental and health concerns are now associated with the fracking process. There are fears of fracking fluid impacting quality of drinking water or natural ecosystems. During hydraulic fracturing, a slurry of chemicals is pumped into the ground with the intention of creating tiny cracks and propping these cracks open with a viscos fluid containing sand particles. The viscosity of the fluid keeps the sand from settling, but once the fracking team wants to extract gas from the well, viscosity needs to decrease so all the fracking fluid can be easily removed. Decreased viscosity is achieved by adding breaker, usually an oxidizing chemical that can break bonds in the original polymer chains that were giving the fluid its viscosity. This study aims to replace the conventional breaker, ammonium persulfate, with a less toxic oxidizing agent. Analysis of the breaking mechanism has led to novel ideas for potential replacements. Additional potential replacements were theorized from techniques used in chemical cleaning and paper industries. Rheological tests (both frequency sweeps and rate sweeps) were conducted on possible replacements to determine how they compare to ammonium persulfate in terms of decreased fluid viscosity. The impacts of temperature and concentration were further analyzed for the most viable replacements. Filter-degradation studies were conducted to quantify the relative effect of each breaker on the size of polymer residues it leaves behind. Replacements deemed viable based on degradative ability were further compared on the basic of relative toxicity and cost. Results conclude multiple possible replacements for ammonium persulfate. The most viable of these are ferrous sulfate and sodium hypochlorite. Sodium hypochlorite works as well as ammonium persulfate at lower concentration, but is highly toxic in aquatic ecosystems. Ferrous sulfate only works as well as ammonium persulfate at double the concentration, but has no known health or environmental impacts.