Toyo Suyemoto (Kawakami) Collection
JavaScript is disabled for your browser. Some features of this site may not work without it. 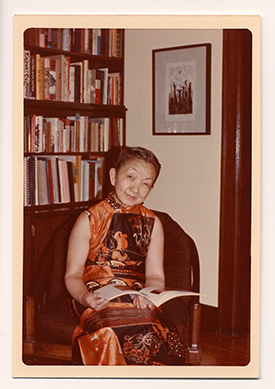 Starting in the 1930s and continuing throughout her life, Toyo wrote poems and essays extensively, with her published works appearing primarily in Japanese American newspapers, magazines, and anthologies.

The Suyemoto family entered the Tanforan Assembly Center (San Bruno CA) on April 27, 1942, in compliance with Executive Order 9066, requiring the internment of all Japanese Americans living in and near the West Coast.

The family was relocated on October 3, 1942 to the Central Utah Relocation Center (Topaz) where they were interned for three years, leaving on October 23, 1945. During the camp years, Toyo taught English and Latin in high school and served as librarian at the Topaz Public Library.

After release, the Suyemoto family moved to Cincinnati, where Toyo worked as a librarian for the Cincinnati Art Museum and later at the University of Cincinnati. Tragically, her son Kay Kawakami died on August 7, 1958 from complications of allergies. Toyo earned a masters degree in library science at University of Michigan, and from 1964 worked at the Ohio State University Libraries, where she was Head of the Social Work Library and Assistant Head of the Education Library. At Ohio State, Toyo was known affectionately as "Mrs. K." She retired after 21 years of service in 1985 with the rank of Associate Professor.

Toyo Suyemoto’s papers document her personal experiences and those of her family members, the internment experience, life at Tanforan and Topaz, the movement for redress, and other matters related to Japanese Americans, while her poetry notebooks, diaries, and correspondence with poets, writers, and artists document her artistic life. Prominent among the papers are typescripts of many presentations that Toyo made to college and high school classes, community groups, and others narrating her internment experience.


Collections in this community