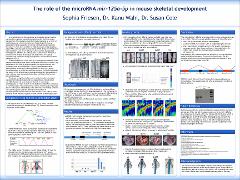 In all vertebrates, the ribs and vertebrae develop from repeating tissue blocks called somites that form early in development. The regularity of somite formation depends on several genes with oscillatory expression; each oscillation corresponds to the formation of one somite. These "clock genes" include Lunatic fringe ( Lfng ), which must oscillate for normal somitogenesis. In chick, the microRNA mir-125a-5p destabilizes Lfng mRNA, allowing for its rapid clearing during the "off" phase of each oscillation. Loss of mir-125a-5p in chick results in disorganized somitogenesis; whether it plays a similar role in mammals is unknown. The purpose of this study is to determine if mir-125a-5p regulates Lfng expression during somitogenesis and axial skeleton formation in mice. To determine the role of mir-125a-5p in mouse somitogenesis, CRISPR-Cas9 mutagenesis was used to create mice lacking this miRNA. Lfng expression in mir-125a-5p mutant and wild-type mouse embryos was compared via in situ hybridization. Effects on somitogenesis were determined by in situ hybridization for Uncx4.1, a somite boundary marker, in mutant and wild-type embryos. To directly investigate the results of mir-125a-5p loss on skeletal development, older embryos were stained with tissue-specific dyes to mark bone and cartilage. Neither somitogenesis nor skeletal development was significantly altered in mir-125a-5p mutants, indicating that mir-125a-5p does not have the same vital role in mammalian somitogenesis as it does in chick. It may be that mir-125a-5p is uninvolved in mouse somitogenesis; alternatively, similar miRNAs could compensate for its loss. Interestingly, some adult male mice lacking functional mir-125a-5p appear to be less fertile; this could be due to the location of mir-125a-5p within an intron of one isoform of Spaca6, a gene involved in sperm-egg fusion.