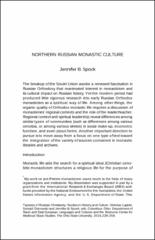 The breakup of the Soviet Union awoke a renewed fascination in Russian Orthodoxy that reanimated interest in monasticism and its cultural impact on Russian history. Yet the modern period had produced little rigorous research into early Russian Orthodox monasticism as a spiritual way of life. Among other things, the organic quality of Orthodox monastic life requires a discussion of monasteries’ regional contexts and the role of the leader/teacher. Regional context and spiritual leadership reveal differences among similar types of communities (such as differences among various cenobia, or among various sketes) in social make-up, economic function, and even pious forms. Another important direction to pursue is to move away from a focus on one type of text toward the integration of the variety of sources contained in monastic libraries and archives.

The author retains copyright ownership of this item, which is made available for research and educational purposes. Permission to reuse, publish, or reproduce the content beyond the bounds of Fair Use or other exemptions to copyright law must be obtained from the author.