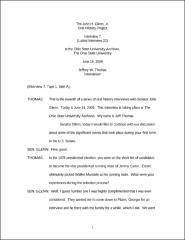 Senator Glenn discusses some of the significant events that occurred during his first term in the U.S. Senate (1975-1981). In 1976, Glenn was considered as a possible vice presidential running mate for Jimmy Carter. Glenn talks about the selection process and his experience in delivering the key note address at the Democratic National Convention. Glenn goes into detail about some of the disagreements he had with President Carter over policy issues, including funding for the B1 and B2 bomber programs, the withdrawal of U.S. military forces from South Korea, and the ratification of the Strategic Arms Limitation Treaty (SALT II). Glenn speaks about his first re-election campaign for his Senate seat in 1980. He won in a landslide victory during an election year where the Republican Party gained both the White House and a majority in the Senate. The size of his re-election victory, plus a surplus in campaign funds, was a factor in Glenn’s decision to run for president in 1984. Glenn states how the demographics in Ohio played a part in his decision. He felt that if the voters in such a diverse state like Ohio overwhelmingly approved of his ideas and stance on policy issues, then his candidacy would appeal to voters across the nation. Glenn cites how his disagreement with the policies and programs of the administration of President Ronald Reagan also played a major role in his decision to seek national office. He then goes into detail about the successes and failures of his presidential campaign. He states, in hindsight, he should have concentrated more on the early primary states of Iowa and New Hampshire, and laments the undue influence these two small states have on the selection of a presidential candidate. The number of candidates for the Democratic Party nomination in 1984 also was an issue in the primaries, especially during debates. Glenn felt he never had enough time during debates to get his views and ideas across to voters. He states he has no regrets about his decision to run for president. He enjoyed the opportunity to talk to voters about policy issues, but thoroughly disliked the amount of time he had to spend raising money to fund the campaign. Glenn points out that he left the presidential primaries $3 million in debt and goes into detail about how complicated it was to raise funds to retire the debt. Glenn ends the session by summarizing the main themes in the commencement speech he had delivered the week before to graduates of The Ohio State University. In the speech he urged graduates to "see things and say, Why," but also to "dream of things that never were and state, Why Not?" To find happiness and fulfillment in their lives graduates should "be a part of something bigger than yourself and be willing to serve others."