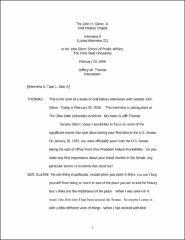 Senator Glenn discusses his first impressions upon entering the U.S. Senate and talks about the assistance he received from various colleagues. He notes how the cooperation and bipartisanship prevalent during his first term in the 1970s changed by the time he retired in 1999. He states that the slowness of the political process in the Senate was frustrating at times, but he grew to appreciate the check the U.S. Senate has on hasty or ill-advised legislation. Mike Mansfield, the majority leader of the Senate, was a mentor to Glenn due, in part, because both were former Marines. Glenn talks about his membership in Senate committees and why he left the Foreign Relations Committee in 1985 for a seat on the Armed Services Committee. Glenn goes into length about the nuclear non-proliferation legislation he introduced and the successes and failures the U.S. experienced in trying to halt the spread of nuclear weapons. He cites an instance where the design for a nuclear weapon made by a graduate student in the 1980s led to a major review of the classified information being made available at the library of the Los Alamos National Laboratory. Glenn goes on to talk about how officials in Pakistan flatly denied their country was developing nuclear weapons, even though the U.S. had information documenting the extent of Pakistan’s nuclear program. Paralleling his efforts in nuclear non-proliferation were Glenn’s hearings and legislation concerning the nuclear weapons facilities administered by the U.S Department of Energy. Glenn details how investigations into constituent complaints about the water quality in the area around the Feed Materials Production Center in Fernald, Ohio, near Cincinnati led to the discovery of major safety and environmental problems at nuclear weapons plants across the nation. Glenn cites how in 1998 the clean-up costs for seventeen sites in eleven states was estimated to be above $300 billion. Glenn discusses in detail the congressional delegation trip he went on in 1976 to the People’s Republic of China. Led by Mike Mansfield, the fact-finding trip lasted three weeks, during which time the delegation met with high level Chinese officials and toured factories and communes in various areas of the country. Glenn points out how congressional trips to foreign countries serve a real purpose in gathering facts and impressions that help members of Congress formulate policy. He cites as an example how a congressional delegation meeting with Egyptian President Anwar Sadat was instrumental in the eventual signing of a peace agreement between Egypt and Israel. Glenn explains how, as chairman of the East Asian and Pacific Affairs Subcommittee of the Senate Foreign Relations Committee, he worked with Richard Holbrook of the State Department to formulate legislation to govern U.S. relations with Taiwan following the normalization of U.S. relations with the People’s Republic of China. He goes on to discuss the trip he took with Holbrook in 1978 as the official U.S. delegation to the ceremonies marking the independence of the Solomon Islands. The delegation took a side trip to New Guinea where Glenn visited an isolated tribe in the mountains above Papua.