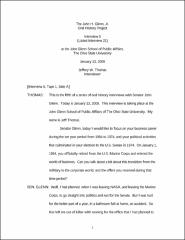 Senator Glenn discusses his business career during the 1960s and his political activities during this time period culminating with his election to the U.S. Senate in 1974. Following his Friendship 7 space flight, Glenn turned down numerous lucrative offers from corporations because he felt it was not ethical to commercialize his position within the national space program. After leaving NASA and the Marine Corps in 1964, Glenn accepted a position with Royal Crown Cola because the company did not require him to do advertising to capitalize on his name recognition. Glenn traveled extensively as the head of Royal Crown International, setting up business agreements to establish company franchises in various areas of the world. During this time period he also partnered with Henri Landwirth and others to develop a series of Holiday Inns in Florida. Glenn became friends with Henri Landwirth when Landwirth managed the hotel the Project Mercury astronauts stayed at near Cape Canaveral. A business venture to build and run a Holiday Inn near the campus of the Ohio State University proved unprofitable. Glenn cites his years in the corporate world as informative and helpful training for his later career in the U.S. Senate. In 1967, Glenn participated in the television program, "Great Explorations," in which he traced the route through Africa made in 1871 by Sir Henry Stanley in his search for Dr. David Livingston. He goes into length about this trip and the "great fun" he had during the filming of the documentary. Glenn discusses his friendship and political activities with Robert F. Kennedy. He mentions visits to the Kennedy home at Hickory Hill and vacation trips to Idaho. He also offers anecdotes that provide insights into Kennedy’s philosophy towards life and friendship. In 1968, Glenn had an active role in Kennedy’s presidential campaign. Glenn explains his various duties during the campaign and provides details and anecdotes about Kennedy as a political campaigner. He speaks at length about the night Kennedy was shot in Los Angeles and the events immediately following Kennedy’s death. Glenn and his wife, Annie, traveled with the Kennedy children from Los Angeles back to the Kennedy home, where Glenn undertook the heartrending task of informing the children of their father’s death. Glenn recounts some of his own political activities in Ohio during the early 1970s. In 1970, he ran and lost against Howard Metzenbaum in the Democratic primary election for a seat in the U.S. Senate. Subsequently, during the next four years he traveled to most Democratic Party events in Ohio and "…as we joked about it, went to every rubber chicken and 22 caliber pea dinner in the State of Ohio and got to know all the party leaders and the people at the local level." In 1974, Glenn again ran against Metzenbaum in the primary, but this time won the primary and went on to gain a seat in the U.S. Senate by winning the general election. He speaks about how his "Gold Star Mother Speech" given at the Cleveland City Club debate just prior to the primary was a major factor in his winning the election. Glenn also recounts his relationship with Ohio Governor John J. Gilligan, going into some length about the pressure Gilligan and other Ohio Democratic Party officials placed on him to run for Lieutenant Governor in 1974. In 1970, Governor Gilligan appointed Glenn to chair the Citizens Task Force on Environmental Protection. Work done by the task force led to the formation of the Ohio Environmental Protection Agency.