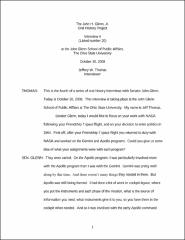 Senator Glenn discusses his work with NASA following the Friendship 7 space flight, and his decision to enter politics in 1964. He summarizes his various assignments with NASA after his orbital flight in 1962, which included the design of the instrument panel for the Apollo spacecraft, acting as an unofficial liaison with Congress, and manning a listening post during the space flight of Gordon Cooper. Glenn goes into length about the goodwill trips he took for NASA to Japan in 1963 and to various countries in Europe in 1965 and again in 1966. He explains how he lobbied with the NASA officials for another space flight, but was only offered a position as manager of the astronaut training program. He did not learn until years later that NASA’s reluctance to assign him to another mission was due to a request by President John F. Kennedy not to put Glenn on another space flight. Not being given another space flight was a major factor in Glenn’s decision to leave NASA in 1964. Glenn explains in detail why he decided to run for a seat in the U.S. Senate during the primary elections in 1964. He discusses his relationship with President John F. Kennedy and the president’s brother, Robert F. Kennedy, and their influence on his decision to enter politics. He provides details about the support he received from some Ohio politicians in setting up a campaign organization and discusses the Hatch Act restrictions he had to campaign under since he was still an officer in the Marine Corps. Some details are provided about his relationship with the Ohio Democratic Party and the reaction to his campaign by his opponent in the primary, incumbent Senator Steve Young. He addresses the criticism he received by some people for leaving NASA for politics by paraphrasing Dwight D. Eisenhower, "…one of the greatest mistakes of his life was getting into politics at all and running for President, because he lost, the day he declared, he lost 50% of the people of the country in support." Glenn explains how an accident that left him bedridden with severe vertigo forced him to withdraw from the campaign prior to the primary election. He mentions how he ran again, unsuccessfully, for a Senate seat in 1970, but finally succeeded in gaining office by winning the 1974 campaign. Also discussed at some length is the project Glenn undertook during his medical rehabilitation to compile exerts from the various letters he received after his 1962 space flight. The exerts were published in a book titled, P.S. I Listened to Your Heartbeat: Letters to John Glenn.