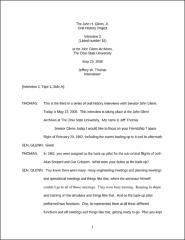 Senator Glenn discusses his orbital space flight of February 20, 1962 aboard the Friendship 7 spacecraft. He states how being the back-up astronaut for the sub-orbital flights of Alan Shepard and Gus Grissom helped prepare him for his own mission. The space race with the Soviet Union had some influence on the decision to make his mission an orbital space flight. He provides details about the numerous delays experienced prior to the actual space flight and goes into some length about an incident during one of the delays involving his wife, Annie Glenn, and Vice President Lyndon B. Johnson. Glenn explains why the Mercury astronauts named their spacecraft and how his children picked out the name Friendship 7. Technical aspects regarding problems with the Atlas booster rocket are discussed, as well as the engineering redesigns introduced to alleviate these problems. Glenn details the physical sensations experienced during liftoff and notes the abruptness of encountering weightlessness upon entering into space. Prolonged exposure to zero gravity did not result in any of the negative affects to his body as feared by some scientists, such as loss of vision and severe vertigo. Glenn goes into detail about his efforts to procure a hand-held camera and how he used the camera to take photographs during the space flight. Many of the tasks planned for the space flight were curtailed due to the failure of the spacecraft’s automatic control system. Glenn provides some technical details about this failure and how he manually guided the spacecraft during much of the flight. He also explains how a false signal indicating a loose heat shield led to the decision not to jettison the retrorocket pack prior to reentry. Details about his reentry, recovery at sea, and subsequent debriefings are provided. Glenn then speaks about the reunion with his family at Patrick Air Force Base in Florida, the parade from the air base to Cape Canaveral, and the ceremonies there with President John F. Kennedy. He provides an anecdote concerning his speech to a joint session of Congress and points out how he and his family were not prepared for the overwhelming national and international acclaim accorded him. He notes how he insisted that all the Mercury astronauts be included in the New York City tickertape parade and how much he enjoyed the parade in his hometown of New Concord, Ohio. Some details also are provided about the amount of mail he received after the space flight and the efforts made by NASA to answer all this mail.