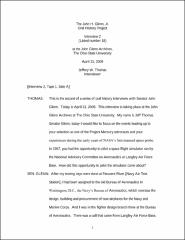 Senator Glenn discusses the selection process for, and the early training of, astronauts in NASA’s Project Mercury program. In 1957, during his assignment at the U.S. Navy’s Bureau of Aeronautics in Washington, D.C., Glenn volunteered to participate in a study of orbital flight and re-entry being conducted by the National Advisory Committee for Aeronautics (NACA) using a space flight simulator located at Langley Air Force Base. This study of orbital flight was "very elementary," but led directly to the work conducted in later years after the NACA became the National Aeronautics and Space Administration (NASA). Glenn volunteered for NASA’s space program because he thought the assignment would be interesting and important. He felt his combat record and his work as a test pilot more than qualified him, plus he had the backing of his family. Glenn provides some details about the selection process NASA put volunteer test pilots through, including the medical testing done at the Lovelace Clinic in Albuquerque, New Mexico and the psychological testing conducted at Wright-Patterson Air Force Base in Ohio. He mentions a few anecdotes that occurred during the testing, and talks in length about his reaction to being placed for hours in an isolation chamber. He points out how his selection as one of the original Mercury astronauts was due in large part to the efforts of one of his former commanding officers, Colonel Jack Dill, who persuaded the selection board not to eliminate Glenn because of his lack of a college degree. Glenn briefly explains the rivalry that existed between the NASA manned space program and the program being run by the U.S. Air Force at Edwards Air Force Base. He speaks about his and his family’s reaction when he was selected as a Mercury astronaut and describes how the Mercury astronauts dealt with the overwhelming media coverage given to them. He goes into some length about the selection of Leo DeOrsey as the astronauts’ agent and the contract they made with Life magazine for their personal stories. Details about the astronauts’ initial training are provided, including descriptions of survival training in desert and jungle environments. Glenn also discusses the astronauts’ close working relationship with NASA administrators and engineers and how each astronaut had a specific program assignment. He explains various technical details about the "ballistic flight" that occurred when a Mercury spacecraft re-entered the atmosphere and how this flight was controlled. Glenn also provides details about how he and other astronauts tested the effects of extremely high G forces on the human body using a 50-foot-arm centrifuge located in Johnsville, Pennsylvania.