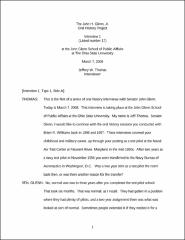 Senator Glenn discusses his duties as a desk officer at the Navy Bureau of Aeronautics and his Project Bullet record setting transcontinental flight in July 1957. Following his assignment as a test pilot at the Navy Air Test Center in Patuxent River, Maryland, Glenn was transferred to the Navy Bureau of Aeronautics in Washington, D.C. His duties as a desk officer involved the implementation of the engineering changes requested for aircraft undergoing testing at the Navy Air Test Center. These duties required many meetings to reconcile the number of change requests with the budget allocated for a particular aircraft program. Glenn also traveled a great deal to the various plants of such aircraft manufacturers as Chance Vought, Douglas, North American, and Grumman. During this time period, Glenn conceived the idea of using the Chance Vought F8U Crusader jet aircraft to establish a new speed record for a transcontinental flight from Los Angeles to New York. Glenn flew this new Crusader aircraft while a test pilot and continued with its development while at the Bureau of Aeronautics. After talking about his idea with various engineers at Chance Vought and at Pratt and Whitney, the maker of the airplane’s engine, Glenn won approval for the project from his superiors at the Bureau of Aeronautics. The record setting attempt would be used to test the endurance of the aircraft’s engine. The flight was named "Project Bullet" because the transcontinental flight would average supersonic speeds exceeding the rate of a bullet fired from a .45 caliber pistol. Glenn provides many details about the planning and logistics involved in the flight, including an account about the crash of a tanker aircraft during a practice mid-air refueling. Details also are provided about the flight itself, with an emphasis on the three mid-air refuelings required to travel from coast to coast. He recounts an anecdote about what happened when his aircraft caused a sonic boom while travelling over his hometown of New Concord, Ohio. The flight broke the transcontinental record by more than twenty minutes and resulted in major media attention for the U.S. Navy and for Glenn. One consequence of the record-setting flight was an invitation for Glenn to appear of the television game show "Name That Tune." Glenn and child actor, Eddie Hodges appeared on the program for five straight weeks and split the grand prize winnings of $25,000.

Interview conducted at the John Glenn School of Public Affairs at The Ohio State University.