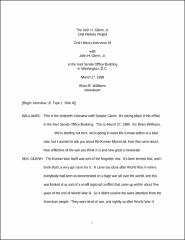 Senator Glenn discusses the Korean War Memorial in Washington, DC and his activities as a test pilot at the Naval Air Test Station in Patuxent River, Maryland. Glenn characterizes the Korean War as the "forgotten war." He carries his own memorial to the war in his memories, but supported the building of the Korean War Memorial "to remind future generations that we have a history and a heritage and a dedication to country…" He provides some details about the efforts, led by Marine General Ray Davis, to establish the memorial on the National Mall. Glenn hosted many of the planning meetings for the memorial in his Senate office. Included is an anecdote about why three of the soldier statues in the memorial have the chinstraps to their helmets buckled. Glenn also comments about the need for continued maintenance for the memorial. The interview continues with a discussion about Glenn’s activities following the end of the Korean War. He talks briefly about an R&R trip he took to Hong Kong. While in Korea in late 1953, Glenn applied for test pilot school, was accepted, and transferred to the school at Patuxent River, Maryland in January 1954. The six-month test pilot course was rigorous academically, with an emphasis on higher mathematics, for which Glenn had to teach himself calculus. After graduation Glenn was assigned to "armament test" at the Naval Air Test Station. This assignment entailed test firing a variety of weapons mounted on the newly-designed aircraft being tested at the station. Glenn provides many details about this duty and recounts a number of incidents that occurred while testing various weapons. In one incident, he describes how the "Cutts compensators" mounted on the ends of the four 20 millimeter cannons on his aircraft malfunctioned and destroyed the aircraft’s engine.