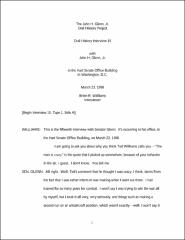 Senator Glenn discusses his temporary assignment flying fighters with the U.S. Air Force from May to July 1953 during the Korean War. He talks briefly about the public perception of the Korean War and contrasts it with World War II and the Vietnam War. He explains his reasons for volunteering for combat duty. In late April 1953, he volunteered and was accepted into a pilot exchange program with the U.S. Air Force. Transferred to the 25th Fighter Interceptor Squadron of the 51st Interceptor Wing, he flew F-86 Sabre fighter jets out of the K-13 airfield located near Suwan. The squadron’s missions involved patrolling along the Yalu River separating North Korea from China. The objective was to stop North Korean MiG jets based at airfields in China from flying south to interrupt U.S. aircraft flying ground support missions. Glenn provides many details about the tactics used and the difficulties faced by pilots flying these interceptor missions. While flying these missions he shot down three MiGs jets. Glenn describes how he had to chase the first MiG jet he shot down all the way to its airfield in China. He explains the complexity of air-to-air combat with jet fighters in the days prior to modern advanced weaponry. One mission when his squadron commander, John Girando, was shot down by antiaircraft while Glenn was flying as his wingman is recounted in detail. While waiting for rescue helicopters, Glenn circled the area into where Girando parachuted until he ran out of fuel, which necessitated gliding one hundred miles and landing safely without power. Glenn states this particular mission was "one of the wildest days of flying that I ever had." Glenn relates how after the signing of the truce ending the war, he met Girando when he was released as a prisoner of war and learned what happened to Girando after he was captured.