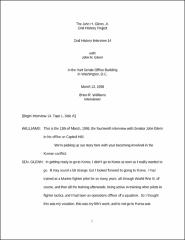 Senator Glenn discusses his combat experience during the Korean War as a U.S. Marine Corps fighter/bomber pilot. He provides some details about his efforts to gain a transfer into a combat squadron in Korea. The Korean War was the focus of the military at this time and he wanted to make use of all of his training in a combat situation. After months of requesting a combat assignment, Glenn was sent to Korea in February 1953 as the operations officer in Marine fighter squadron VMF-311. The squadron flew F9-F Panther jet fighter/bombers out of the K-3 airfield located at Pohang on the east coast of Korea. By this time in the war the front lines had stabilized and the squadron flew mainly low-level missions in support of the ground forces of the First Marine Division. Many of these missions involved dropping napalm bombs on enemy trench positions close to the front lines. The squadron also flew "interdiction missions" deep into North Korean territory. These missions involved bombing and strafing transportation related targets, such as railroads and bridges, and troop staging areas and supply depots. The squadron became experts in blowing up bridges by targeting the bridge abutments. Glenn provides many details about how these missions were planned and executed. Antiaircraft fire was a major concern for the pilots due to the amount possessed by the North Koreans and their expertise in using these weapons. Glenn discusses in length two missions in which his airplane took major hits by antiaircraft fire. Baseball star Ted Williams, who had been called into active duty from the Marine Corps Reserves, was a member of the squadron. Williams flew many missions as Glenn’s wingman. Glenn provides a number of anecdotes about the missions Williams flew.