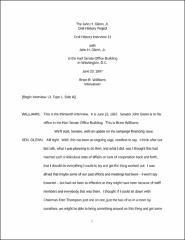 Senator Glenn provides an update to the Senate Governmental Affairs Committee’s investigation into campaign financing. Glenn states the investigation had "reached such a ridiculous state of affairs on lack of cooperation" that he arranged for a one-on-one meeting with the committee’s chairman, Fred Thompson, to try to iron out disagreements. Going into the meeting Glenn had three items up for discussion: to get beyond the issue of subpoenas, how many were issued by the majority versus how many for the minority, and concentrate on known areas of campaign finance abuses; cooperation in the gathering of information; and the role of the minority committee members during the upcoming hearings. He states "that meeting with Thompson came to nothing." Glenn responds to charges in the news media that the Democratic Party was trying to delay the hearings by detailing how the committee minority does not have the power to implement such a delay. He discusses a compromise solution put forth by Senators Arlen Specter and Carl Levin turned down during a meeting of the full committee. He states there still was major disagreement on the issue of granting immunity to certain potential hearing witnesses before these people were screened by the FBI and the Justice Department. He provides further details on the case of foreign money being given to the Republican Party through the National Policy Forum and points out the difficulties involved in obtaining the organization’s records or the records of its director, Haley Barber. He reiterates his opinion that Chairman Thompson went into the investigation with good intentions, "but he's been so hemmed in by his Republican leadership. What they want to make this into is a Republican investigation of Democrats." Glenn voices his disappointment and chagrin in regards to editorials and articles about the investigation written by David Broder and Morton Kondrake. Senator Glenn also discusses his participation in an upcoming congressional delegation to Hong Kong to witness the ceremonies marking the return of the territory to China. He expresses his opinion that the ceremonies are not the correct venue for the United States to protest plans by the Chinese to change the composition and membership of Hong Kong’s Legislative Council.