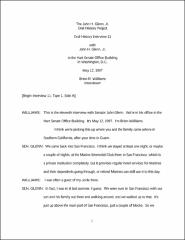 Senator Glenn discusses his duty assignments from 1948 to just prior to his combat tour in the Korean War in 1953. Following his return from overseas duty in China and Guam, Glenn was assigned as an instructor at the Naval Air Station in Corpus Christi, Texas. To his surprise, he spent the first three months at Corpus Christi as the officer in charge of the night shore patrol. This assignment entailed picking up military service members who got into trouble while on leave in Corpus Christi. Glenn characterizes his duties as a shore patrol officer as interesting, but not the type of job for which he would have volunteered. He describes several amusing incidents and a large drunken brawl that sailors were involved in during this time period. After his three months on shore patrol duty, Glenn went through instructor training to prepare him to be a flight instructor for aviation cadets. After completing the training taught by the Instructors’ Advanced Training Unit, Glenn was asked to join the unit rather than become a regular flight cadet instructor. While with the IATU, Glenn helped formulate the syllabus for training flight instructors about the standards set by the Navy for teaching aviation cadets how to fly. He provides details about how his idea of comparing instructor training given by the Air Force to that given by the Navy resulted in his temporary assignment to the Air Force. This temporary assignment resulted in his first certification to fly jet aircraft. While stationed at Corpus Christi, Glenn applied for and was accepted in a three-month course at the Naval School of All-Weather Flight. The course taught pilots how to fly using only the instruments on the aircraft. Graduation from the course earned pilots a much coveted "green card" that qualified them to fly aircraft regardless of weather conditions. After graduating from the course, Glenn was asked to transfer to the school as an instructor. In July 1951, Glenn was assigned to the junior course of the Advanced Amphibious Warfare School at Quantico, Virginia. The course taught all aspects of the organization, tactics, and logistics of ground warfare and amphibious landings. After graduating from the course, Glenn was assigned to the staff of the commanding general of the Marine base at Quantico, an assignment he did not particularly care for since it did not involve flying. Glenn mentions how at that time Marine aviators were looked down upon by some ground force officers. He discusses the options open for him at that time as a career officer in the Marines, and how various assignments, such as the amphibious warfare course, were required for advancement and promotion. While on the general staff at Quantico, Glenn continually applied for a transfer to combat duty in the Korean War. He finally received orders in October 1952 to report to Cherry Point, North Carolina for jet aircraft training in preparation for a transfer to Korea. Also discussed are living conditions at Quantico, various social activities and family matters, and his long-standing friendship with other Marine aviators from his World War II squadron, such as Tom Miller, Tom Collins, and Dick Rainforth.