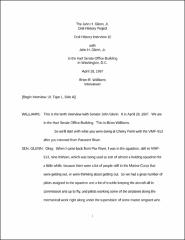 Senator Glenn discusses his post-World War II duty assignments in the United States, China, and Guam during the years 1946 to 1948. In late 1945, following his temporary assignment at the Naval Air Test Center at Patuxent River, Maryland, Glenn returned to the Marine Corps Air Station at Cherry Point, North Carolina. He was assigned to VMF-913, a holding squadron for pilots returning from overseas assignments and for those leaving at the end of their military service. The squadron had too many pilots and not enough ground mechanics, so there were difficulties in keeping enough aircraft in commission for any meaningful training. In March 1946, Glenn was transferred to squadron VMF-323 based out of El Toro, California. The squadron flew to numerous air shows in the state of California, events Glenn scheduled as part of his duties as the squadron’s operations officer. Glenn volunteered for a transfer to a squadron stationed outside of Peking, China, for an overseas assignment he thought would last three to six months, but ended up lasting two years. The squadron in China flew support missions for the teams under the command of General George Marshall trying to negotiate peace between the Nationalists and the Communists. Glenn provides details about their mission and describes the country as "Old China" at that time. He offers various anecdotes about life in the Chinese capital, including a visit to the home of the squadron’s "houseboy." He notes the poverty and hunger prevalent in the country and recounts illustrative incidents, such as the appearance of relief food supplies distributed in the country on the black markets within Peking and the selling of the garbage from the air base’s mess hall. The squadron escorted the trains evacuating General Marshall’s peace teams as they traveled from Peking to the port of Chin-Huang-Tao in the spring of 1947. Planes from the squadron then flew to Shanghai, from where they eventually flew to Okinawa. Glenn details how, while in Shanghai for two weeks waiting on clear weather, he went along with members of the U.S. Navy’s Criminal Investigation Division as they patrolled the various bars and opium dens along the Shanghai waterfront. After leaving China, the squadron was stationed in Guam, where Glenn was assigned as the squadron’s operations officer, the duties of which Glenn summarizes. Various stories about life on Guam are given, including the efforts by the Marine officers to have their families, including Glenn’s own, brought out to live on Guam. The session ends with an account of the Glenn family’s return voyage through rough weather from Guam to San Francisco on a Military Sea Transport Service ship.