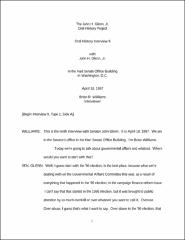 Senator Glenn discusses the upcoming hearings by the Senate Governmental Affairs Committee on campaign finance reform brought about by alleged abuses during the 1996 presidential elections. He provides background information concerning the increased costs of political campaigns driven by the need to use television advertising to reach voters. He laments this rise in campaign costs, and states how "going out hat in hand trying to get money to run a political campaign is the most onerous thing in politics." He talks about some of the fund-raising practices brought to light during and after the presidential campaign, such as the overnight stays in the White House used by the Democrats and political access in exchange for campaign contributions used by the Republicans. Glenn states his opinion that using federal and state monies to finance political campaigns would help end abuses. Glenn details how the hearings on campaign finance reform were given to the jurisdiction of the Governmental Affairs Committee through the efforts of the Senate Majority Leader, Trent Lott. He recounts his initial discussions concerning the hearings with the committee chairman, Senator Fred Thompson of Tennessee. As the ranking minority member of the Governmental Affairs Committee, Glenn wanted to use the hearings to gather information on the larger problems of campaign financing in general, rather than just focus on alleged abuses by President William Clinton’s re-election campaign or misdeeds by the campaign of the Republican challenger, Robert Dole. Glenn presents a chronology, up to the April 18th date of the oral history interview, of the negotiations between himself and Senator Thompson on such issues as the scope of the committee’s investigations, the funding allocated by Congress for the hearings, and the number of subpoenas submitted and issued by the committee’s Republican majority as compared to the number allowed for the Democratic minority. He ends by stating how abuses in campaign financing erode the trust in government held by the general public and furthers people’s feelings of cynicism and apathy towards the political process in America.