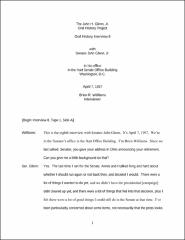 Retirement from the U.S. Senate
Thoughts on political civility and bipartisanship

Senator Glenn summarizes the factors behind his decision not to run for a fifth term in the United States Senate in 1998. Saying, "There is no cure for the common birthday" Glenn states his age (77) and the fact he would be 83-years-old at the end of a fifth term as the major factor in his decision not to seek re-election. He discusses the lack of bipartisanship and civility in the Senate, an issue that has led other Senators to retire. He traces the rise of incivility and party rancor in Congress and cites examples of how practices by the Democratic Party, particularly in the House of Representatives, share the blame for the current lack of bipartisanship. Glenn talks about the timing of his retirement announcement and how prospective candidates for his seat in the Senate need at least a year to raise funds and organize an effective campaign. He then goes into why he decided to make his retirement announcement at Brown Chapel on the campus of Muskingum College in his hometown of New Concord, Ohio. Stating "That’s where my whole career really did start," Glenn details how he heard a radio broadcast about the bombing of Pearl Harbor on his way to Brown Chapel to listen to Annie Glenn’s senior organ recital. His decision to drop out of college and join the military to fight in World War II changed the direction of his and Annie’s life. Glenn discusses his retirement speech and the points he wanted to make to the college students in the audience. He describes the importance of public service to the well-being of the country and laments the cynicism and apathy towards politics shown by young people. He states how he plans to work with students after his retirement from the Senate in an effort to reverse these negative opinions. Glenn describes his philosophy in life, citing three characteristics in people that provide for a satisfying and productive life: exercising your own talents to the greatest extent possible, working for some purpose greater than yourself, and doing something specifically for others less fortunate than yourself.