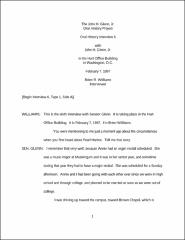 Senator Glenn describes the place and his activities when he heard that Pearl Harbor was attacked. He was driving to the chapel at Muskingum College to hear Annie (Castor) Glenn’s organ recital. After discussing the idea of going into the armed forces with Annie and his parents, he enlisted as an aviation cadet into first the Army, then later into the Navy. His father was proud of his service with the Ohio 37th Division in Europe during World War I, but rarely discussed his experiences in the war. In New Concord, patriotism was assumed, not debated. Early experiences after his enlistment are described in previous interviews. Glenn talks about how the trip from San Diego to Hawaii on a troop transport was not a pleasant experience due to crowded conditions, poor food, and the lack of an antisubmarine escort after the first few days. Details are provided about the living conditions the squadron had at Midway and in the Marshall Islands, where they had little, if any, contact with the natives. The censorship of mail is discussed, along with how much contact the squadron had with the outside world. Glenn tells two stories to illustrate the fighter pilot mentality, how "any fighter pilot, real fighter pilot, that doesn't believe that he's about as good or better than anybody else in the air had better get out of the business." He describes a typical day during combat operations in the Marshall Islands, including briefings, take-off and rendezvous, mission, return and landing, and debriefing. Glenn emphasizes the importance of navigation and provides details on how "dead-reckoning" navigation was used. The use of napalm bombs is described, including one mission by the squadron that Glenn led due to the absence of the commanding and executive officers. Leading the squadron boosted Glenn’s confidence in his abilities, especially since "the intelligence information later indicated that we had burned out that particular island." Also described are "oxygen hop" training flights where pilots flew up to maximum altitude to learn how the Corsair functioned in the thinner air located at these higher altitudes. Several flight related terms, such as "dead-stick" and "flame-out," are defined. Glenn relates how the personnel in his squadron were a cross section of the country.