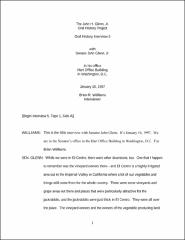 Senator Glenn describes the diversions from training when his squadron was stationed in El Centro, California prior to being shipped overseas, including rabbit hunting, swimming, and a ski trip. His squadron, VFO-155, left San Diego on a former banana boat that had been converted into a troop transport. After spending a few days at Pearl Harbor in Hawaii, the squadron went to Midway Island for a few months of duty and further training. Glenn describes patrol missions and training accidents that happened during this time, the burial of a pilot at sea, and the emotions involved in losing a good friend. Midway was used as a submarine base. When submarines were in port for refitting and repairs the Marine aviators took the submariners on flights in two-seat training aircraft. The submariners, in turn, took the Marines on test runs in their submarines. Glenn provides an anecdote about the time he was on the U.S.S. Barb during one such test run when the seal around the periscope broke. Glenn points out how later in the war the U.S.S. Barb sank a Japanese aircraft carrier in Tokyo Harbor. A diversion for the Marines on Midway Island was watching albatross (gooney-birds) fly and raise young. After four months on Midway Island, Glenn’s Marine squadron was posted to Majuro in the Marshall Islands. Glenn describes combat missions to bomb and strafe atolls in the island chain occupied by the Japanese, but bypassed by the American campaign up through the Pacific. He goes into detail about operations against the islands of the Mili, Jaluit, and Maloelap Atolls. His squadron usually flew low-level strafing runs against antiaircraft positions while another squadron flew dive bombing sorties. At times his squadron would be divided between strafing and bombing aircraft. He also describes the use of newly-developed napalm bombs against Japanese targets and the damage done by antiaircraft fire to his F4F Corsair aircraft on five missions. Later during its overseas tour, VFO-155 moved to airfields in the Kwajalein Atoll, first to the airfield at Roi-Namur. Glenn describes how his squadron flew to Tarawa in the Gilbert Islands for operations against the island of Nauru. These missions entailed long-distance flights over water and required the use of an external drop fuel tank. Also described is the use of dead-reckoning navigation when flying from island to island. Glenn provides anecdotes about time spent exploring former battlefield sites on Tarawa. After serving his one-year overseas combat tour, Glenn was posted to the Naval Air Test Center at Patuxent River, Maryland, where he was stationed when the war ended. Glenn provides some details about his duties as a test pilot. In 1946, Glenn volunteered for overseas duty with VMF-218, a Marine fighter squadron based at Nan Yuan Field outside the Chinese capital of Peking. The squadron flew daily missions protecting the teams under the command of General George Marshall trying to establish peace between the communist and nationalist forces.