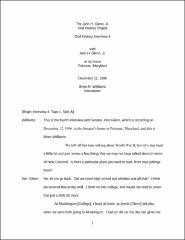 After discussing his college experiences and life in New Concord, Ohio, Senator Glenn describes his training as a pilot in the U.S. Marine Corps during World War II. He details some of the social customs in New Concord, Ohio during the 1930s and 1940s. The churches and the school were the centers of activities. Many citizens did not approve of dancing, alcohol use, and smoking. School clubs and sports were scheduled for several evenings each week. Church activities occurred on Sundays and Wednesday evenings. The "world" was mainly New Concord, though newspapers and radio kept people informed about current events. After his orbital space flight in 1962, the high school was named for him. John’s parents and Annie’s parents were good friends before the children were born. John and Annie played as small children together and began "going steady" in high school. Senator Glenn’s father had a plumbing business and later on an "associate" Chevrolet dealership. His mother helped in the plumbing store and enjoyed reciting poetry. After volunteering for military service following the attack on Pearl Harbor, Senator Glenn went to flight school as a naval aviation cadet. After transferring to the Marine Corps and graduating from flight school, Glenn was originally assigned to a transport squadron, but managed to get transferred to a fighter squadron based in El Centro outside of San Diego, California. He describes the difficulty in finding housing for married officers. He goes into detail about training with the old F-6F Hellcat fighter and later on with the new F-4U Corsair fighter. He describes practice gunnery and bombing flights and the importance of properly sighting-in the aircraft’s guns. Glenn makes several comparisons between the technology of World War II and that used during the Korean War and afterwards, such as manually cranked landing gear, radios, propeller control, pressurized G-suits, ejection seats, and parachutes. He emphasizes his pride in the being in the Marine Corps and cites as an example a question he asked his first squadron commander while in training for combat in the Pacific – "What makes Marines any better than anybody else?" To which his commander replies, "Marine training makes every Marine more afraid of letting his buddy down than he is of getting hurt himself." Glenn expands upon this answer by describing examples of this maxim during his flight training. He also provides anecdotes on social activities taking place in the evenings and on weekends.