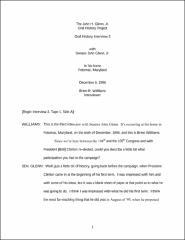 Senator John Glenn cooperated with President William Clinton during the president’s reelection campaign. Glenn was impressed with President Clinton’s proposed changes in budgeting and taxes to produce a balanced federal budget. The economy of the Reagan and Bush years increased the debt of the U.S. from $1 trillion to 3.9 trillion. He also supported President Clinton on welfare reform and on meeting with leaders of other countries about nuclear proliferation. Glenn was willing to be involved with the 1996 presidential campaign. Ohio is the focal point of national political campaigns for the same reasons that corporations test market in Ohio – diversity in agriculture and industry, religious beliefs and political thought. The joint campaigning is described with several interesting anecdotes. President Clinton sincerely likes people. Glenn found campaigning exhilarating when ideas were shared but disliked having so many events per day. The Robert Dole campaign is discussed and the need for campaign finance reform is described. The logistics of campaigning with the president is very complex, though some people enjoy this type of detail work in campaigns and do it year after year. Glenn wrote his own introductions for President Clinton. The presidential staff would inform the press on the tour when a new proposal will be announced. After the election, Tom Daschle arranged a nine-day congressional delegation trip to the Far East. Senator Glenn had been in China in 1946 with a Marine fighter squadron protecting the peace teams of General George Marshall. In the 1970s he went to China with a congressional delegation headed by Mike Mansfield. On the Daschle trip he visited a place in Vietnam doing prosthetic limb replacement for victims of landmines. Glenn remarks on the friendliness of people in Vietnam towards Americans and points out that fewer military service people are missing from the Vietnam War than from Korea and World War II. Glenn goes into length about the merits of congressional delegation trips to foreign countries and describes the benefits gained by members of the delegation and the host countries. He explains what happens during a typical meeting with a foreign leader and mentions how he was able to discuss space policy and international cooperation in the exploration of space with the President of China. Senator Glenn recalls his activities after the bombing of Pearl Harbor on December 7, 1941. These activities lead to becoming a pilot in the Marine Corps. He compares the learning environment between college and military flight school. He talks about his wedding day after graduating from flight school, his first posting at Cherry Point, North Carolina, and the trips he and Annie took between Ohio and North Carolina and later on to a new posting outside San Diego, California.